Finally, be strong in the Lord and in his mighty power. Put on the full armor of God, so that you can take your stand against the devil’s schemes. For our struggle is not against flesh and blood, but against the rulers, against the authorities, against the powers of this dark world and against the spiritual forces of evil in the heavenly realms.
Ephesians 6:10-12
The information in this newsletter is tangible evidence of God’s faithfulness when His people choose to obey His mandate, not out of duty or reward but out of pure love for Him and His Son through the enabling of the Holy Spirit. Your involvement with us in this ministry is an extension of that evidence. This is what God continues to accomplish, as together we fulfill His command to make disciples of others in our time. Thank you for joining us in this divine endeavor. We invite you to read this information with excitement and thanksgiving.

As of April 10th, no COVID-19 cases had been reported in Turkana. Praise God! There are strict border restrictions in place. Anyone coming into Turkana must self quarantine for 14 days. Our Zone leaders are keeping an eye on their villages as best as they can. People have been asked not to travel from village to village unless it is absolutely necessary. This will be hard for those who have livestock, as they generally travel every day to find pasture for their flocks. There is also a 7pm – 7am curfew in place in Kenya.
Ministry is still happening, but the teams are following the social distancing rules that have been set in place. People are taking every opportunity to share the Gospel and encouraging one another using their Audio Bibles. 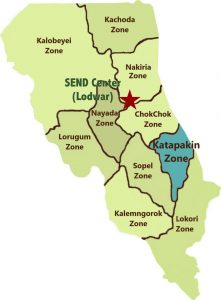 In January, Mary Esinyen, Share International’s Children’s Ministry Coordinator, traveled to Katapakin Zone to follow up on training she had done with the area Sunday School teachers. She met with teachers from Natadei Village. Their discussion focused on how to disciple the children that are currently attending Sunday School and how to encourage these children to disciple other children, with the older teaching the younger.

She was able to witness the work that the Sunday School teachers were doing, making sure they were following the guidelines that were given them to be effective teachers. There was a total of 122 children and 4 teachers in the two classes she observed.

Mary traveled to other Zones in February and March to visit and encourage Sunday School teachers in their work.

Her vision for making disciples of the Turkana children is to train the Sunday School teachers to be disciple-makers, who in turn train the children to make disciples of others and develop good morals at home through their lifestyle.

Currently there are 175 Sunday School teachers teaching in the 10 Zones whom Mary is responsible for training. These teachers are reaching and sharing the Gospel to around 10,500 children! Please continue to pray for these teachers as they reach the next generation for Christ. 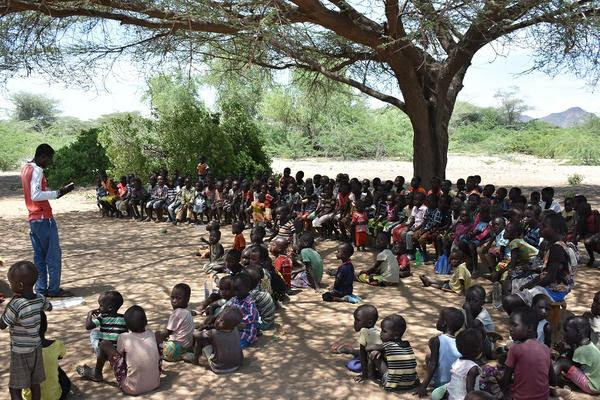 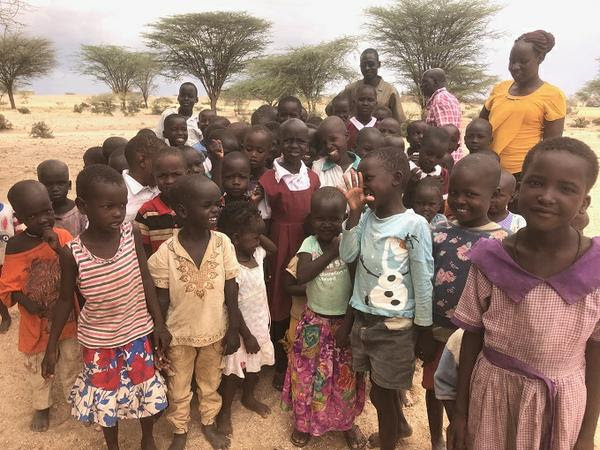 Some of the Sunday School Children in Kangkukus Village, Sopel Zone 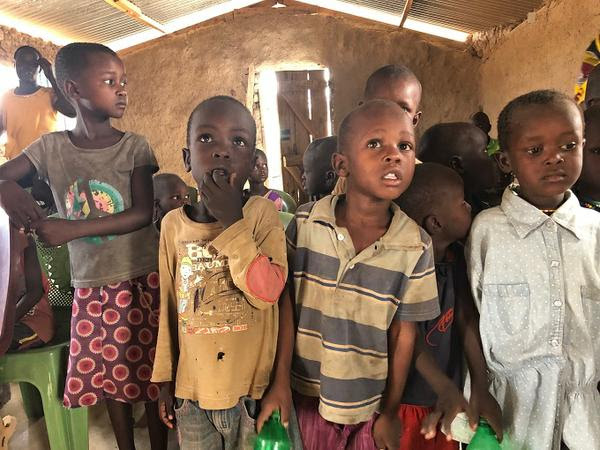 The purpose of the Adult Literacy program is to empower the spiritual and cognitive growth of students and the entire community. Share provides Bibles to students that are able to read and write and are pursuing the national proficiency exams.
Simon Lochoro, Adult Literacy Coordinator, reported that currently there are 1,386 adults enrolled in the AL Classes. The teachers are using the contextualized DMM training methodology to teach students in the 30 classes how to make disciples of others. There are 122 first generation cell groups within AL Classes in 8 of the 10 Zones.
Two Adult Literacy Classes in Progress

In March, Dalmas Esekon, the Share Team Leader in Turkanaland, and Coordinator Michael Silale traveled to Natadel and Ekwar villages in Katapakin Zone to induct and train the new AL teacher – Robert Lonyeit – how to use the “3-Stones” Disciple-Making Methodology. 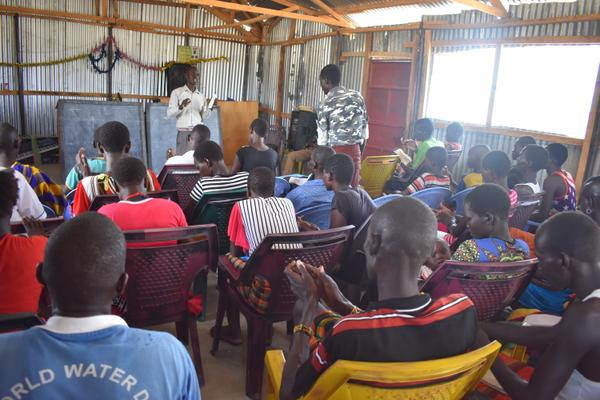 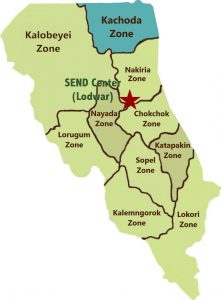 The Village of Piringan is about 150 miles north of Lodwar in Kachoda Zone. It has a population of 3,360. The SHARE team set out around 9:30am, but were soon at a standstill as the Monti River had overflowed and covered the road. While they waited for the water to subside, they learned a little history about the village.
The name “Piringan” is derived from the “big guns” (Rocket Propelled Grenades) used by the British to fight Italians during WW II in northern Turkana, Kenya, which was a British protectorate. The village is inhabited by nomadic Turkana pastoralists. The economic activities include herding, fishing in Lake Turkana, basketry, and small enterprises across the border with Ethiopia. Piringan has been a blood bath for many years. Even after Kenya’s independence in 1963, the Ethiopian militia (Merille) has continued to kill thousands of Kenyans in the village, with the most recent case in 2011 when they killed over 50 Kenyans and maimed many more. Even after deployment of Kenyan security forces, some infractions still occur, especially against Kenyan fishermen in Todonyang Village.
The team noticed the clouds were gathering again; the road was not going to open any time soon. They backtracked and chose to go a different but difficult route. The rains pounded Turkana all night long. All the roads became muddy and treacherous. They drove with great caution and finally arrived at the Kachoda Shopping Center at dusk. They spent the night there and began ministry the following day.
Monti River overflowing and cutting off travel

Taking the alternate route led to a difficult passage

As told by James Ewoi
We arrived in Piringan Village in the morning of Tuesday, March 10th, 2020. Motivator Samuel Ekidor received us well. He had prepared the villagers for our coming. But our arrival in the village triggered resistance from a section of the villagers. They told us they didn’t want our God; that they already had one. Most of them are from the Legion of Mary sect, others from the Roman Catholic Church, and the rest consult witchdoctors.
One elderly man ran into his hut and came out wielding a spear to pierce us if we insisted on holding any meetings in the village. It took the intervention of the area Government Chief – Mr. Joseph Lokoel Achach – and Motivator Samuel Ekidor. They calmed them down. The Chief sought to know why they were threatening visitors. The Chief warned that anyone who picks a weapon to scare visitors will be accused of a criminal offense. The villagers stated that someone told them to ignore any visitors that came from Lodwar because they are members of “Illuminati”. After a long talk and introduction from our team, the villagers came to realize that some of our team were their own. Moses Loburuk’s (DMM Coordinator) father came from the village and Moses Ng’akipi’s (Lorugum Zone Coordinator) parents originated from the village and migrated south. They softened their stance and listened to us.
We shared the Gospel to about 100 people, with 54 deciding to follow Christ. We taught them using the Disciple-Making methodology. We did not baptize them; they told us they needed to know much more about Jesus first.
We had arranged to stay inside Piringan Primary School due to the rains that made screening of The Jesus Film impossible. The principal of the school allowed us to stay for only two days. We had to maximize our time and do what God had called us to do there. We wanted to stay longer, but circumstances did not allow us. They residents asked us to return. We are now planning to return to baptize, teach them more about Christ, and continue training the DMM Methodology. Please continue to pray for these individuals, as the region is also steeped in witchcraft.
Opposition from witchdoctors, cults, sorcerers, and some opinion leaders has become the order of the day in our daily ministry work. We pray that God continues to renew our strength as we serve Him in Turkanaland.
DMM Coach, Moses Loburuk, teaching the Men the “3-Circles” Methodology 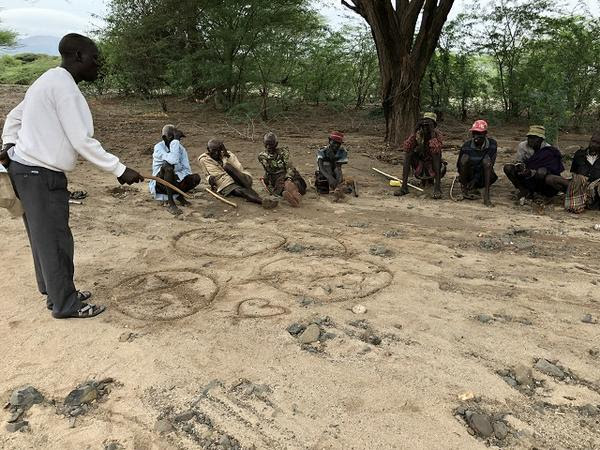 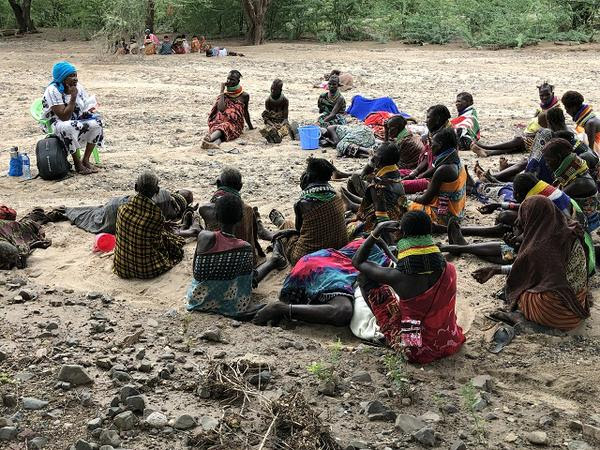 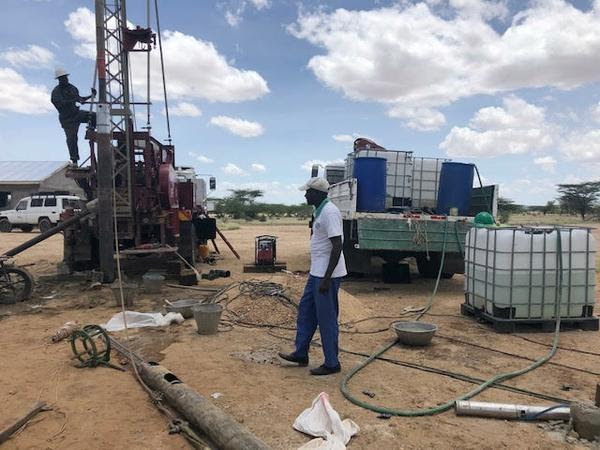 In December, LakeView Church in Stoughton, WI asked its congregation if they would be willing to do an “Advent Conspiracy”. That meant instead of purchasing Christmas presents for themselves, they would give that money to Share International for the express purpose of drilling a well for fresh water in Sopel Village where Charles Lokol Samal, the Motivator that LakeView Church supports, ministers. The congregation took on the challenge and raised the money needed to drill a well. In March, the drilling company came to Sopel Village and began the process of surveying and drilling a well. They reached “sweet water” at 26.5 meters but continued drilling to 45 meters. There is a good supply of water continuing to flow from this well. They have installed a hand pump so that the villagers can easily get water for their families.

Dedication of the well in Sopel Village 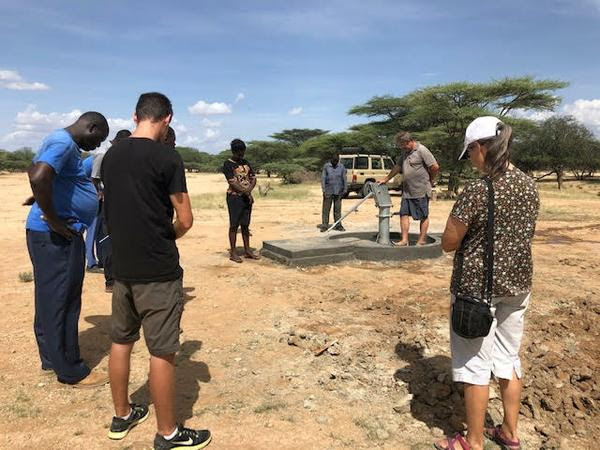 Motivator Charles taking his first drink of the “sweet water” 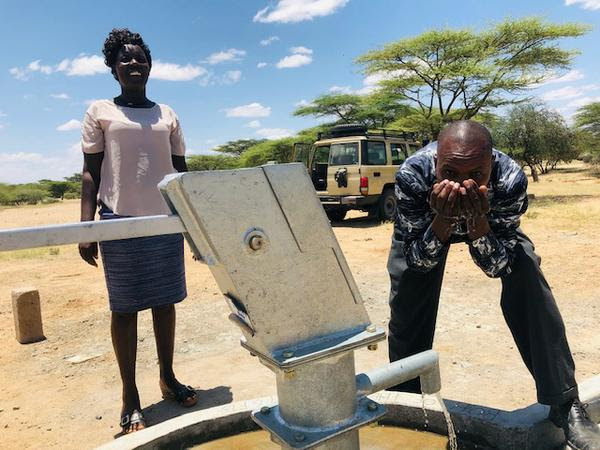 Thank you so much for your participation in prayer with us during our Facebook Live Prayer Time on Friday, April 10! If you missed it, that’s okay! Click the link below to watch it now!   https://www.facebook.com/shareint/videos/348502192773950/
#PrayerIsPowerful

Some of SHARE’s Motivators in Katapakin Zone:

SHARE has now added monthly updates on each Motivator on our website through February 2020. To read information about what the Lord is doing through the Motivators, please visit  http://shareint.org/missionary-updates/ .
Each sponsor of a Motivator tremendously assists in spreading the Gospel throughout Turkanaland by providing prayer and financial support. We still have 26 Motivators in need of a sponsor. We invite you to consider sponsoring one of them at http://shareint.org/sponsor-a-missionary/ .

In March, billions of locusts invaded vast areas of Turkana in the east and south. In one week they ravaged the vegetation in Kapedo, Napeitom, Lokori, Lopii, Kadengoi, Lobokat, Kakongu, and Kainuk villages. The swarms move in colonies like a cloud.

A Huge Thank You

The families in the villages of Natadei, Loeamatet, and Kangichok are grateful for the gift of beans, corn, and oil they received through a generous donation by a couple in the U.S. following devastating infestation of locusts. The foodstuffs fed 420 people!

We thank you very much for your continued prayers and support, especially in a time of very unpredictable economy resulting from COVID-19. Together we are witnesses that the Lord fulfills His promises, even as we choose to give the “widow’s mite” that He has entrusted to us (Mk. 12:41-44, Lk. 21:1-4) for the sake of sharing the Good News with others. Our confidence is in God who enables us to “do all things through Christ who strengthens us” (Phil. 4:13). Amen and Amen!
The financial need for 2Q of 2020 is $200,123. Your donation is greatly appreciated – always!
The SHARE Director – Sammy Murimi – is open to share more with your church or small group upon invitation at director@shareint.org; (318) 243-4243. 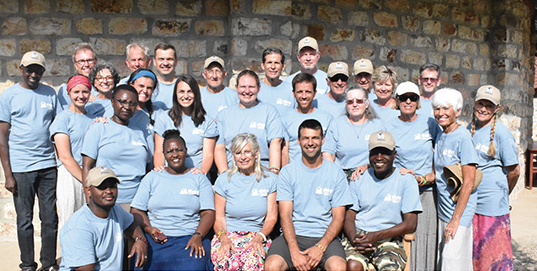 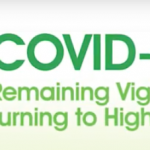 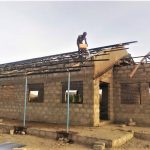