This story is about Peter. He and his family live in the village of Nabwel-pus. It was a village some 18 miles from Lodwar, but because of poor road conditions it took about an hour to get there in our rented Diguna trucks, WWII trucks used by the Nazi’s and refurbished for Christian missions. This was the first village we visited and we would return there 3 days in a row. We arrived in this village on a Sunday and were struck by its rough rocky terrain. Soon we were struck by the joy of this people celebrating the Lord’s Day with prayer, singing, and dancing! They came from miles away on foot to hear about God and see the Americans.

Our small team, including Tim, Wayne, Sammy, and I, presented the creation story to the older men (men with children). Peter was in our group. He is a goat herder like most of the men in the village, having done this since he was 10 or 12 years of age. Consequently most of the men did not attend school for more than a couple of years and were illiterate. After we finished teaching that first day Peter came up to me and said through an interpreter: “I think we will be friends.” I told him that we were friends already. Despite his inability to read or write, he showed great enthusiasm and grasp of the material we were presenting. Peter is married to one wife and has 3 sons, the youngest still in arms. I was privileged to meet his family, including his mother and brother.

On day 2 in Peter’s village, our team gave our testimonies. Several men including Peter gave their lives to Christ. On the 3rd day Peter and two other men gave their testimonies and then presented the information about creation, our broken world and redemption that they had learned. Sammy told the men that if they would build a school and supply the blackboard, chalk and eraser, Share International would provide a teacher for adult literacy.

Many in the village were baptized that day though Peter was not baptized at that time. I gave him a Gideon New Testament with his name written in the front and a silicon bracelet with Philippians 4:13 inscribed on it: “I can do all things through Christ who strengthens me”. This is a verse I pray often. Peter could not read his name nor this verse, but his oldest son read it to him. I am praying for Peter and his family that they will all grow in their faith in our Lord Jesus Christ. I know I will see Peter again! 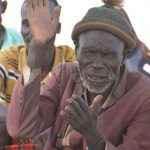